a first problem: consciousness has a profusion of meanings mind italiano 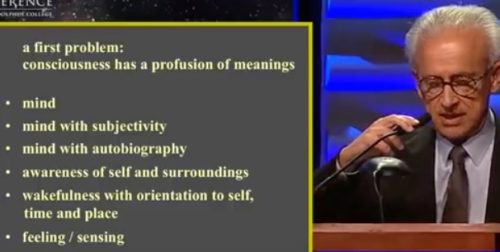 – The program are pre-set (innate, instinctual)
– Learning can expand their deployment (conditioning, habits)

All programs are valenced;
they produce body states that are experienced as feelings;
feeling range from pleasure and well-being to malaise and pain;
their experience is necessary for life regulation;

I think that when I open my iPhone, i can see a beautiful image that was produced by a certain engeneering system.
There are many ways of producing images like that, and there’s no question the image is there, and finding out how the image is produced, is not going to give you an understanding of conscioueness at all, is going to be reverse engeneering on how that image is produced.
I think our brains, with all their very great complexity of circuitry, are capable of producing images in auditory system or visual system or somatosensory system . They are equivalent to the images that you can get through an engeneered device like an iPhone.
The problem is that the iPhone is not conscious because it doesn’t have a life, it doesn’t have an organism at risk, it doesn’t have a platform that is there to regulate its life and to constitute the recipient, the interest party in everything that is going on in that mind at that point. 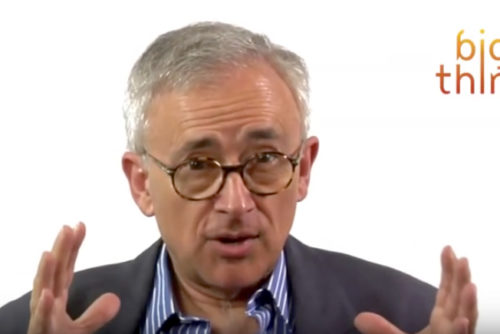 Question: What is happening in our brain when we feel an emotion?

Damasio:  Feeling of an emotion is a process that is distinct from having the emotion in the first place.  So it helps to understand what is an emotion, what is a feeling, we need to understand what is an emotion.  And the emotion is the execution of a very complex program of actions.  Some actions that are actually movements, like movement that you can do, change your face for example, in fear, or movements that are internal, that happen in your heart or in your gut, and movements that are actually not muscular movements, but rather, releases of molecules.  Say, for example, in the endocrine system into the blood stream, but it’s movement and action in the broad sense of the term.

And an emotion consists of a very well orchestrated set of alterations in the body that has, as a general purpose, making life more survivable by taking care of a danger, of taking care of an opportunity, either/or, or something in between.  And it’s something that is set in our genome and that we all have with a certain programmed nature that is modified by our experience so individually we have variations on the pattern. But in essence, your emotion of joy and mine are going to be extremely similar.

We may express them physically slightly differently, and it’s of course graded depending on the circumstance, but the essence of the process is going to be the same, unless one of us is not quite well put together and is missing something, otherwise it’s going to be the same.And it’s going to be the same across even other species.  You know, we may smile and the dog may wag the tail, but in essence, we have a set program and those programs are similar across individuals in the species.

You can define it very simply as the process of perceiving what is going on in the organs when you are in the throws of an emotion, and that is achieved by a collection of structures, some of which are in the brain stem, and some of which are in the cerebral cortex, namely the insular cortex, which I like to mention not because I think it’s the most important, it’s not.  I actually don’t think it’s the number one structure controlling our feelings, but I like to mention because it’s something that people didn’t really know about and many years ago, which probably now are going close to 20 years ago, I thought that the insular would be an important platform for feelings, that’s where I started.  And it was a hypothesis and it turns out that the hypothesis is perfectly correct.  And 10 years ago, we had the first experiments that showed that it was indeed so, and since then, countless studies have shown that when you’re having feelings of an emotion or feelings of a variety of other things, the insular is active, but it doesn’t mean that it’s the only thing that is active and there are other structures that are very important as well. (Recorded July 2, 2010Interviewed by David Hirschman)

the best definition that i can produce for you of emotions today (this in based on our understanding of the problem) is that it is a collection of automated actions. there are aimed at a particular effect, they will have importance for the regulation of life that automated package of actions you could call it an action program, is something that has been in your brain at birth obviously under the influence of a genome – 2010